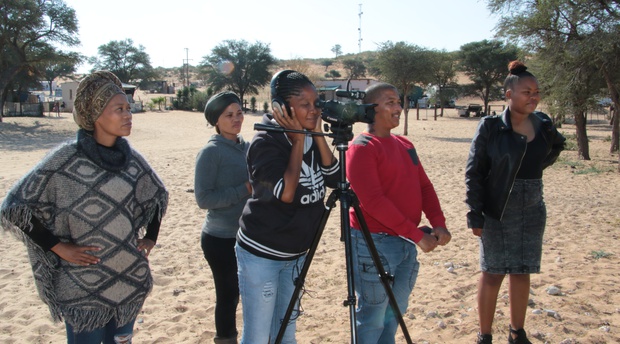 The ASF sheds some light on possible solutions when it comes to curating indigenious knowledge...

The ASF is passionate about celebrating and documenting the living heritage of the diverse communities around Southern Africa.

In 2017, we embarked on a training programme to assist communities in telling their own stories. All too often the rich heritage of communities is told by outsiders, this programme allows participants to investigate their own history and heritage and to give an authentic and modern voice to the stories that have shaped history.

The pilot training programme called the #8FilmProject was first rolled out in the Khomani San community of the Northern Cape. A group of young adults from the community were selected to take part in a training course that introduced them to the basics of storytelling and imparted video-making skills.

Videographer and photographer, Ryan James, headed up the training of the participants over four week-long workshops.

"The participants were very enthusiastic about the process from start to finish. What was remarkable was that by researching and scripting their own stories, they actually discovered their own unique history in a way, so the workshops had an even bigger meaning for the participants," says James.

He says that planning the production schedules and scripting their own films was a challenge for participants, but once they  had taken care of the theory side of things, they couldn't wait to get out and start filming.

"That's where the magic always happens," he says, "When you are out in the field doing interviews and looking for that perfect cutaway, and then everything comes together and the story takes on an energy of its own."

The community film-makers were part of the process all the way, and a big highlight of the project was the community viewing held at the Andriesvale office, that proved quite emotional for the film-makers and some of the CPA members, like Petrus Vaalbooi who was thrilled with the eight films and said that the project had shed light on the rich heritage of the Khomani San culture.

The editing workshop that was held in June 2019 consisted of a small group of participants who worked hard at gaining the skills needed to create their own films.

"I was really pleased with the progress made in the workshops," says James. "The film-makers can definitely go out and tell their own stories and document events and happenings - and having a basic understanding of the editing process has been very beneficial to the training," says James.

In addition to filming functions and events, James hopes that the participants will document their own stories and the stories of their elders.

"There are some incredible stories that still need to be told. The eight films for the #8FilmProject are just the beginning. We look forward to seeing a lot more films and stories being told by these talented community film-makers. It was a great privilege working with them," he says.

If you would like to pursue the opportunity of giving communities the skills and know-how to tell their own stories – in words, photographs and images, please contact the African Safari Foundation